Fact: A lot of men want to have physiques built like Greek gods and superheroes.

Fact: A lot of them are also either too lazy to get their butts off the couch, too busy with a lot of other things, aren’t motivated enough, don’t have access to a good training facility, or a combination of all these excuses.

Fact: Inaction does not produce any tangible results.

Given all of these facts, it’s no wonder why a lot of men grimace at the thought of truly committing to an active and fitter lifestyle. They want it but not bad enough to make things happen.

This is one of the primary health challenges most men face. We’ve gotten so used to sitting in our nice and comfortable offices and have settled into a sedentary — and unhealthy — lifestyle. If men do not go out of their way and make time for exercise, any of the following can happen:

On top of that, it also weakens your respiratory and immune systems which are two of the main systems that COVID-19 greatly affects.

However, despite the obvious and not-so-obvious health risks, a lot of men still fail to live an active lifestyle because they just don’t value it enough to take action.

How can you encourage a man to become more active?

This is a tough one. There are three types of men where fitness is concerned. First, the type who is aware of the health benefits of an active lifestyle and needs no pushing to get fit. Second, one who does not have a care in the world about fitness so long as he doesn’t feel sick. And lastly, the one who knows the importance of an active lifestyle but doesn’t have the drive to make things happen.

The last two are the ones that need plenty of convincing. And no matter how hard you try, they just won’t budge. Or at least the third type might consider it and give you a glimpse of hope but the second one is going to be tough. It’s not so much the goal but the motivation and the mindset that need to be changed.

So how exactly do you get them to change their minds about working out and being more active? Here are a few ways to get them to seriously consider and take action: 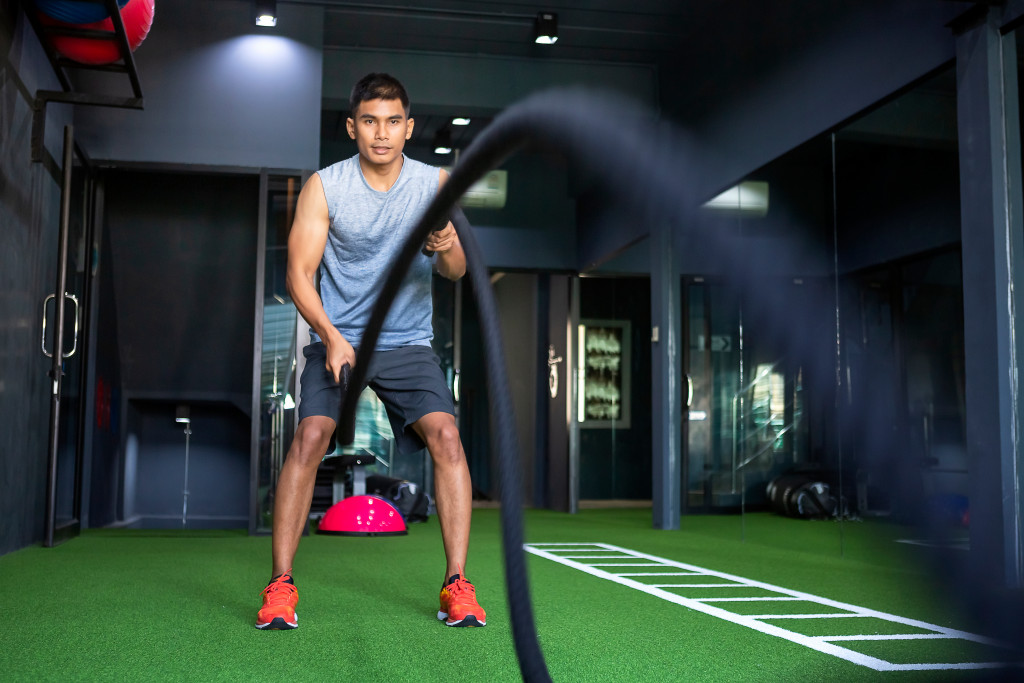 Companies and institutions have different ways of marketing stuff to get people to buy whatever it is they’re selling. Whether a company is selling a new product through content marketing or the government giving out promotional items for a massive vaccination program, we are surrounded by sales pitches in different forms.

Similarly, getting an inactive person on the road to fitness means selling the idea to him. And when it comes to health and fitness, you need to be the number one believer and advocate of what you’re selling. They have to see for themselves that you are living an active and healthy lifestyle. They need to see how it affects you and those around you. If anything, your life and testimony will be your strongest sales pitch.

Help them set realistic goals based on their present circumstances

Often, the reason why most men hesitate to exercise is the overwhelming thought of the amount of work they need to do to get to their fitness goal. After all, big guns and washboard abs don’t appear overnight. They are fully aware of the work one has to put in to get in shape.

To minimize the hesitation and get them on the road to fitness, help them set realistic goals and expectations. There is no easy way to be fit apart from putting in the hours. Treat it like a marathon. Help them work their way to the finish line (fitness goals) by taking things one checkpoint at a time (progress).

Aesthetics is just the icing on the cake

While having a chiseled body is definitely a reward of physical fitness, it is just one of its many health benefits. On top of having the physique to match Superman’s, they also become physically stronger, gain better endurance and agility, have a faster metabolism, better mental health, increased confidence, and improved overall mood.

It’s never too late to get started

Some who refuse to work out might say that it’s already way too late for them to get in the game, especially those who are older. That’s just a lie they choose to believe and hold on to. There are a lot of older men who have decided to take better care of their bodies and started exercising regularly. After consistently doing it for a few months, they notice the changes in their bodies brought about by their commitment to exercise. They feel stronger, healthier, and younger which makes them feel good about themselves. So, no. Age is just a number. Anyone can still get in shape if they choose to act on it now.

Forget the past, build a better future by taking action in the present

Perhaps one of the reasons why some men refuse to get into fitness is past trauma. Maybe they got hurt or injured in one of their attempts or probably got insecure about their physical condition, especially among the ultra-competitive. Either way, what’s done is done. Leave the past behind and plan for a better future.

Advocating health and fitness can help give a lot of men a newfound purpose and drive for life so don’t stop sharing about their benefits.

How to Start a Career as An Athletic Trainer

Making Your Business More Efficient: Ideas to Improve your Company